Gigs were thin on the ground again in 2004, as commitments to families and jobs constricted the time that we had available to commit to the act. The pressure on Mister Macko, as a result of his onerous job as Head of Promos at ETV, combined with the frustration that we were unable to do enough gigs or command sufficient fees, meant that despite his great love for the act and all it represented over the years, he felt unable to commit to The Rotters for the entire season. In addition, McFacko’s job as head of the departments of drama (and incredibly also dance), at his Stoke school, meant that he was unsure of his ability to fulfil occasional Rotter gigs outside of school holiday times and even then, he was keen to retain family summer holiday time.

As a result, we recruited a long-standing friend and colleague from the Isle of Wight – Jake Rodrigues. Jake had created his own troupe for a season – The Pierrot Promenaders, as part of the Isle of Wight centenary commemoration of Clifford Essex’s first pierrot troupe in 1891. He had come to our various gigs over the years at Arreton Manor and at the Newchurch Garlic Festival. A skilled musician and singer, he had moved to London by this time with his partner (soon to be wife) – Pamito. He became known to us as Shameless Shabbacko – inspired by his existing nickname of Shabby. We also agreed that if McFacko was unavailable to perform, Mister Macko would be able to deputise.

This was the first year of Promenade Promotions’ operation and The Pierrotters featured as part of our first, printed, annual report.

Shabby’s first performance was at a memorable gig at The Coronet Theatre, Elephant & Castle: there we performed on a bill with a host of variety legends such as millionaire magician Paul Daniels, ventriloquist Ray Alan & his dummy Lord Charles and trumpeter Joan Hinde with her mighty horn. A few particular memories have stayed with me from that gig: me, Ray Allan, Lord Charles and Nephew all meeting in a corridor, Paul Daniels trying-out his magic tricks with rubber bands in our tiny dressing room, which was so small that Gacko and I had to go outside to put-on our pierrot make-up, where we rested our mirrors on rubbish bins in an alley behind the theatre that reeked of urine… in the middle of which, Gacko turned to me and said “Uncle, will it always be this glamorous?”

We also performed once again in the town gardens at Goole and I was proud as Punch when my four year-old daughter (Elsie) walked-out as one of The Rotters for her one and only public performance as The Great Elsacko, with her tear-jerking rendition of ‘Twinkle, Twinkle, Little Star’. 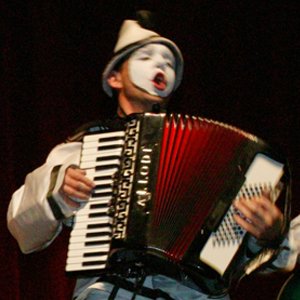 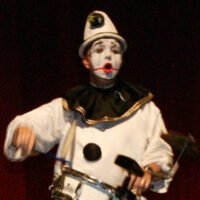 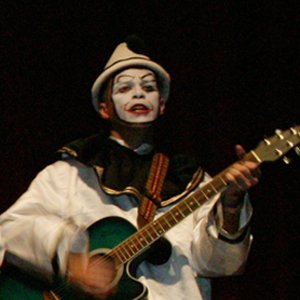