According to Rotternews, Boy Gacko officially became known as ‘Old Boy Gacko’ on the achievement of his 30th birthday this year and McFacko’s nuptials to Sue-Gill Just-Noo were delayed.

Benacko became our administrator for the year, as once more we were able to play resorts and events throughout the country – not always al fresco, for just like the pierrot troupes before McFacko’s nuptials were delayed us, we found ourselves also being invited to play indoors at venues such as Theatre Royal, Bury St Edmunds. At Bury St Edmunds, we performed during the total eclipse of the sun and Gacko managed to walk straight into a tree wearing his sunglasses and Mr Macko sat cross-legged on the floor as the world went dark, the birds stopped singing and the local hippies started chanting.

We were part of the burgeoning street arts industry as more and more towns and cities wanted street artists to animate their centres and festivals started to spring-up as the new, short-term destination for people seeking alternative amusements in outdoors and temporary spaces. Gigs such as Stockton International Riverside Festival, Piece Hall in Halifax and Sidmouth International Folk Festival were large, high-profile events.

This was also the first year that Gacko & I tried to book-out the new double-act – ‘Poppets Puppets’, which operated parallel to The Pierrotters. This was intended as a way of providing seaside family fun at a cheaper price than The Rotters (2 people being cheaper than 5) and although they were administrated from the same source and not supposed to compete with one another, tensions inevitably evolved around which act took precedence and why.

Our new state-of-the-art, folding publicity maintained our presence in the forefront of graphic design and also our tongue-in-cheek sense of humour for all formalities! We also commissioned a new promotional video to be made Sadly, our application to the Foundation For Sports and Arts for a van, costumes and instruments was turned-down, but it was out first larger-scale funding application.

BBC2 shot the half-hour documentary ‘5 Guys Named Acko’ as part of its ‘Picture This’ series in Bexhill on Sea – a half-hour, bitter-sweet, fly-on-the-wall programme made by director, Gerard Brown. 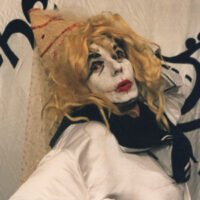 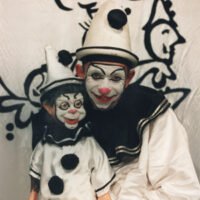 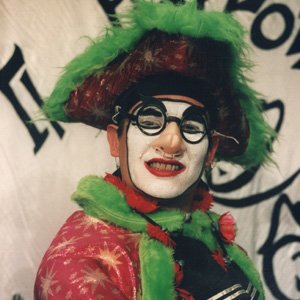 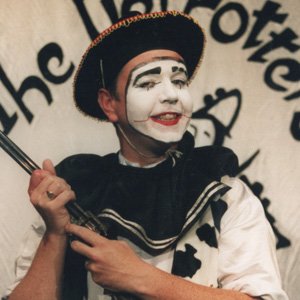 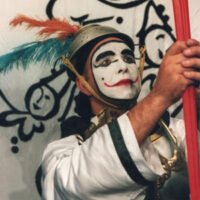 A promotional video of ‘The Pierrotters’ recorded on VHS made by Graham Hardy.