The impact of digitisation is apparent this year – the change-over from film to digital photography, meant that we did not commission or receive photographs to the same extent as previously; also, information such as contracts and invoices were starting to be sent online, but I was not organised or knowledgeable enough to be able to retain these records in a retrievable format. As a result, the following 2-3 years has very few hard copies in the archive.

This was also a time when the difficulties of maintaining a 5-piece troupe were exacerbated by all of us living in such different parts of the country: Bradford, Barrow-in-Furness, London and Stoke. We were also upholding other, better-paid jobs and found ourselves increasingly responsible for sustaining our families, which meant that there were pressures all round just to keep the act going. Poppets Puppets became more successful, as promoters looked towards cheaper acts for small-scale, acoustic events and the larger events looked towards more spectacular, amplified acts. The tension between the two acts was inevitable, as they included two of the Rotters (Gacko & Tacko!) and were administrated from the same source – Rotternews this year identifies that The Rotters would only play summer season weekends, whereas Poppets would take every weekday. We even tried to establish performance guidelines to maintain decorum in the act, but such formalities were never very successful with The Rotters, who were, at their core, an anarchic group…the nearest we ever got to adopting such structures were embodied in what was known as the ‘pierrot paper bag of pronouncements’ – literally an old paper bag on which was written our code of ethics, but as it was kept by McFacko, it has been lost!

Nevertheless, we played at events in York, Morecambe, Liverpool, Filey Stoke & Bolton, as well as flying to the Isle of Man in order to perform at Sir Squacko’s wedding. Due to the erratic availability of different Rotters, we decided to explore the possibility of ‘deps’ for the following year – an idea which flew in the face of the core Rotter identity of building the troupe as a fixed group of individuals, committed to each other.

One of the more unusual occurrences of the year was when I was rung-up by Doctor Dacko (who had left the act some years earlier) to say “I am standing next to record shop window, with a full-sized, cardboard cut-out of you, Uncle!” It transpired that a popular band called The Coral had used an image of me from a photo-shoot in Morecambe to advertise the front-cover of their EP and track ‘Skeleton Key’… all they had changed was to put a skeleton head on my body. This had then been a key feature of their marketing campaign and so my image went to number one in America, with over three and a half million hits! I rang their agents to ask for something in recognition of their use of my image and we agreed that they would let us dance in costume and skeleton heads on the mainstage at Glastonbury Festival, where they were headlining that summer. Sadly, they cancelled at the last minute due to what they termed ‘health and safety reasons’ and we merely received tickets to their show and some merchandise…I kept the album and cardboard cut-out that they sent, which still stands guard by my office. 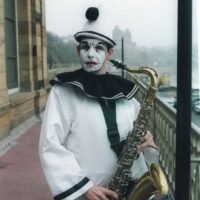 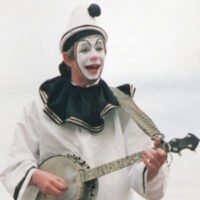 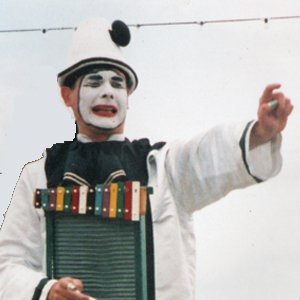 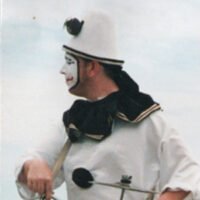 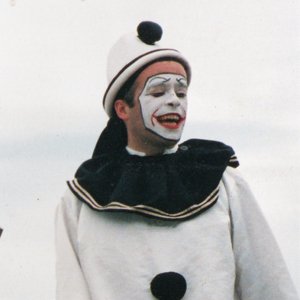