The line-up shifted once again: this season, Squacko came in on drums in place of Packo and Backo played bits & pieces instead of Dacko. It may be of interest that Squacko’s name derived from his love of “squidgy bananas” and Backo’s from his love of various forms of weed.

This was the year that the Palace Pier gave us a retainer to play there for an hour each day as their resident mobile performers: the Palace Pier Manager – Keith Brown, would pay us in cash each week in the room above the arcades, where there was a room and a staff member devoted all day to just counting the coins from the slotties. We were allotted a changing space at the seaward end of the pier, in a side-room of the old Palace Pier Theatre, next to the children’s outdoor disco. There was a slatted wooden floor, with a small section that could be raised that went straight down to the sea below… the fortune teller said that she used to catch fish through a similar hatch in her room, but we simply used ours as an ‘en suite’ if we were caught short. We displayed materials in the window – such as the adapted front cover of the NME with a youthful Shane MacGowan making a passable impersonation of Tacko (as you can see in the gallery pictures). We printed our second season of stickers and produced our first postcard – a tradition of pierrot troupes down the years, from a photo-shoot on The Palace Pier. This was also the year when we made our first video, showing us putting-on our make-up and performing on the Palace Pier (scroll down the page for video).

We always maintained a close connection with the West Pier (after whose rotting state we were originally named) and this year played for the opening of a kiosk on the forecourt. We also played gigs for a variety of local events, including the day care centre at Sussex House, in Kemp Town, ‘Lomas House’ – a home for Missionaries in Worthing and for The Zap Club – which we generally referred to in our shows as “The Zappety-Zappety Zap-Zap-Zap Club!” 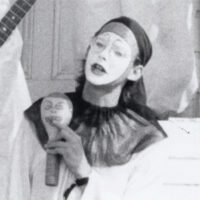 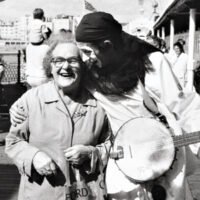 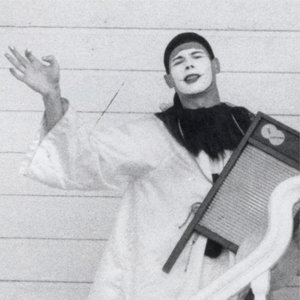 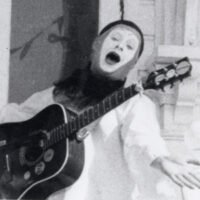 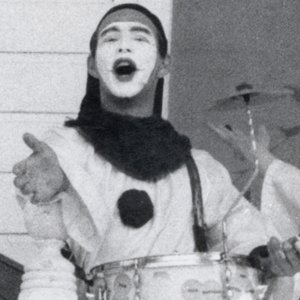 ‘The Pierrotters’ regularly played daycare centres and hospitals – Sussex House in Kemp Town, Brighton, was a regular venue that we supported in the 1980s, courtesy of ‘Ma Green’.

An early lineup of the act on the Palace Pier in Brighton. Fond memories of Sergeant Stone too! 1985.